Whitey decided to sneak out of the house on his own once again. This is him from yesterday morning, under the illusion of being well camouflaged when I came searching for him. Though clearly surprised at his masterstroke not working, he was quite happy to accompany me back to the house and then promptly do his regular walk round the block just to give this early rising human some company and much needed leash holding exercise.


I find it hard to begrudge Whitey these little escapades. The call of the road burns strong in him so much so that I am often confused as to whether adoption saved him or came in the way of a rich fulfilling life. After all, for a couple of weeks before Holi 2020 (when he adopted us), he freelanced the streets with his other independent canine buddies. Being abandoned by his previous set of humans, I do understand why he needs to seek out more reliable company. On every one of those escapes, his happiness at living the free life is evident - a toothy smile lighting up his goofy face as he rockets around a field or sand pile or under construction house with his buds from the 'hood. Unlike them, he is not fully committed to life on the road and before long, he is back at me, smudging my clothes with mud and enthusiasm.

Though much recommended by serial dog owners, the "human must be leader of the pack" philosophy of raising one never caught my fancy. IMHO being an alpha male is just too much work. Every dog-human relationship has its share of mutual frustration - of one half thinking that the other is not human enough, and the other regretfully realizing that his buddy is not actually another dog. I am happy enough with the rest of it, filled as it is with ridiculous fun and life restoring camaraderie.

I get it, Whitey. It's fun being your own boss. It's great to be doing your own thing. Yes, there's the risk and there's the uncertainty.  But it's balanced by (theoretically) limitless possibilities. As a responsible dog keeper/fren and well aware of the damage that free-ranging dogs cause to local wildlife, I cannot let you live up all your dreams. That mongoose across the nala, the brinjal stealing monkey - all best kept at barking distance and will remain so.

But I do like to quietly sneak up to the roof on a full moon night and catch you howl to that orb in the sky like your wilder cousins from forests past. It reminds me that there will always be a tinge of the untamed in you. Come to think of it, Whitey, this may be why dogs are kept in the first place. Leashed as we are by modernity into concrete caves of comfort, a bark, a wag and a sprint are instant channels into what we had once known well, back in our days of sleeping in the wild.

[https://virtual-inksanity.blogspot.com/2020/07/freelancer.html]
Postulated by Roy at 2:29 PM No comments:

Let the Breeze In

It's impossible to find a reason to smile in remembered happiness during an article on the looming dangers of a second coronavirus outbreak. But I managed to.

"Its lead researcher, Makoto Tsubokura, said that opening windows on commuter trains can increase the ventilation by two to three times, lowering the concentration of ambient microbes." Thus spake a scientist and got me thinking.


It has been my contention that despite the heat and the dust and the stench (cruising urban slums at a slow roll) to be tackled when travelling in a Indian railway sleeper compartment, there is nothing quite like it.


For one, the awareness that you are travelling in a thundering metallic mechanical snake and that speed is fun can only reach completeness in an express train's sleeper coach. In a scrunched general compartment, you are too uncomfortably close to someone's else's armpit and in the outer space like isolation of an AC coach, you become more understanding of why some rich people commit suicide just to break of their boredom. The sleeper class is where it is at.


There's also the demonstrably extra-social vibe that the fresh air brings in making a sleeper coach a much chattier and occasionally argumentative space. Either way, it is much better than mentally wrestling the "Are we there yet?" monsters. If the weather outside gives you a chance demonstration of a thunderstorm after a hot day in the plains, you don't even need someone to talk to. A window seat and unidentified sources of ecstatic happiness are more than enough company.


There is a lot that could be said against the sleeper coach experience - the gnawing and only partially irrational fear that you might reach your destination but your under-seat luggage might not; the office route pass-carriers whose rights to 99% of your paid-for berth you cannot dare deny; the unmentionable status of toilets within 10 minutes of the start of the journey. But that would be nit-picking.


Lonely trees, temples on distant hills, galloping bridges over nameless streams - the landscape passes you by but at a pace that you can process from a height that does not require entrusting a deep belief in God (otherwise known as a pilot). Sprinkle on some imagination and you could be riding along the train on a very fast infallible motorcycle. Turn it up a notch more and you could live entire lifetimes in those little habitations that you rumble through, never to be visited in real life but sampled, oh so beautifully, in a few seconds of track based dreaming.

"It was so beautiful that words could not describe it"

Whenever you hear that tired travel description, do note that the limitation is of the speaker-author, not that of the words. Words that could describe the aforementioned beauty do exist. It is only that the author is yet to find them or incapable of doing so.

Come to think of it, writing is said to have been first invented for that driest of dry jobs - accounting. Knowing how terribly rigorous most humans are in that regard, it would be untruthful for the craftsman to blame this tool for being inadequate.

This also gives the much derided accountant a minor reprieve from the judgement of self-declared 'creatives'. Cold as numbers may seem to be, remember that without them there would be no poetry.

[https://virtual-inksanity.blogspot.com/2020/07/stone-cold-poetry.html]
Postulated by Roy at 8:33 AM No comments:

Fresh off reading an article of digital pollution, this is also a personal reckoning of sorts. What the Internet and particularly social media has given us are platforms. Whether we are worthy of being given platforms of such immense power is a different matter.

Air, water and soil pollution are phenomena which most sensible people have acknowledged and are working to address. The concept of digital pollution is yet to take root to that extent. Given our political leanings and enemies of choice, it is all too easy to classify the opposing camp’s views as the pollutants. Yet digital pollution has more to do with information overload rather than bias.

Looking through my suggested Facebook memories, the occasional joy of finding something unique is counterbalanced by the massive amounts of inane posts which must have meant something to me then but sure don’t mean much now. They sit there, somewhere on my timeline, to reappear on their anniversary to be rejected yet again.


Much like plastic, a piece of digital information tends to live on forever; refuses to degrade; denies the grim reaper. Our unhealthy obsession with documentation ensures that the most meaningless moments are also recorded for posterity’s sake. Decades of irrelevant data in the form of a cloudy day pic or a restaurant selfie will eventually start clogging the system. Like that individual grocery bag, the combined impact will be tough to comprehend until it reaches unmanageable proportions. As someone who is a committed data hoarder, I represent the digital polluter equivalent of the SUV riding, AC seeking, 'development' seeker.

Email ThisBlogThis!Share to TwitterShare to FacebookShare to Pinterest
Nature of the beast: Left of the middle, True blues
Location: Dehradun, Uttarakhand, India 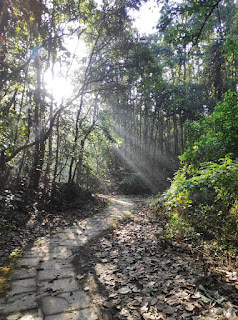 Before COVID-19 denies me access to a beautiful part of my (almost) daily routine for at least the next 7 days, the trail shines in all its filtered sunlit glory. Some may accuse me of having posted very similar pics in the past but I just can't help it. If not anything else, it's a reminder to me that there exist some things I can never tire of.

What does tire me is the infantile stupidity of "Humanity is the virus and COVID-19 is the cure" and of the pseudo-science/patriotism being peddled (read vibration forwards and plate banging equals Siachen soldiers' duty).

COVID-19 should not be cause for pointing Facebook fingers at "greedy" humans. The most at danger are our most weak & vulnerable - the poor, the old, the infrastructurally challenged. Wishing for their death is just casual Facebook psychosis. Neither should it be treated as a free pass to racism ala Kung-Flu and other such monikers.

We are a wonderfully capable species on an extraordinary planet, problem/solution in our lab/home. The mad urge to bang plates could be much better redirected towards some quiet introspection. To listen to the birds and the breeze, to pay attention to the sea inside our minds.

[Link to this blogpost]
Postulated by Roy at 11:38 AM No comments:

Email ThisBlogThis!Share to TwitterShare to FacebookShare to Pinterest
Nature of the beast: 10 minute post, Blind fan archives, Left of the middle, The devil's advocate 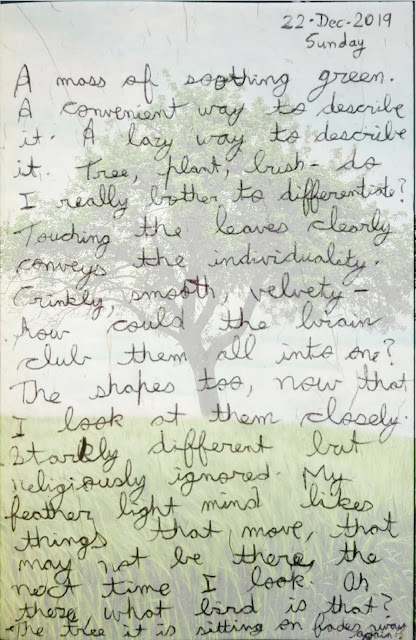 PC: Unsplash
Postulated by Roy at 11:18 PM No comments: 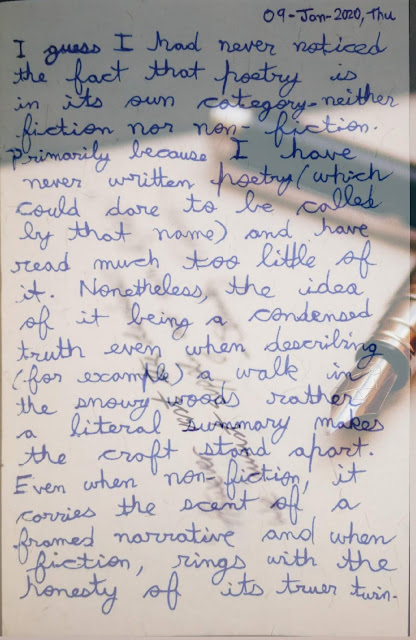 PC: Unsplash/Alvara Serrano
Postulated by Roy at 7:00 PM No comments: